The following appeal was issued in 1812 to proprietors in the district, with the view of the erection of a bridge across the Spey at Lower Craigellachie:- 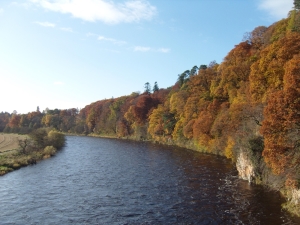 The Spey, from its great rapidity, the vast body of water which it discharges, and frequent and excessive Floods to which it is subject is perhaps of all Rivers in Britain the most dangerous and opposes to Travellers the greatest difficulties in passing its stream. From above Grantown in Strathspey, to Fochabers near the influx of the Spey into the sea, a distance of upwards of 40 miles, there is no Bridge for the accommodation of passengers, the Ferry Boats are in general insufficient and incommodious, and it very frequently happens that for days and weeks together no boat can safely pass the river, to the great inconveniency of the public and to the interruption of all communication through the interior of the Country from one extremity of the Kingdom to the other:- The necessity therefore of at least one Bridge over the River in some convenient situation between Grantown and Fochabers is sufficiently obvious. 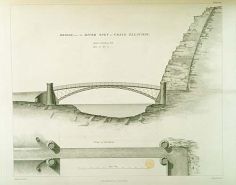 Some time ago an application was submitted to the Parliamentary Commissioners for making Roads and building Bridges in the Highlands of Scotland, requesting their aid towards erecting a Bridge over the Spey at the Ferry of Boat of Bridge in the Parish of Boharm, but the commissioners did not conceive themselves warranted in granting such aid on account of the proximity of that Bridge to one erected at Fochabers. This induced the Contributers to the Bridge at Boat of Bridge to select a situation further up the River, not only less objectionable in point of contiguity to other Bridges, but holding out the certainty of infinitely greater utility to the Community, namely, at a place called Lower Craigellachie on the confines of the Parishes of Aberlour in Banffshire and Rothes and Knockando in the Parish of Elgin. 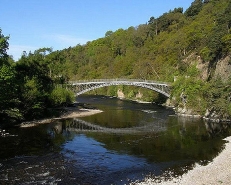 Here the direction of the stream and nature of the Banks are very favourable for the site of a Bridge, a great many important lines of Turnpike and Statute Labour Communication Roads leading to different parts of the Kingdom lately made under the Banffshire Turnpike Bill and some now in execution. All centre at this point as a common focus, one in particular, where united to those of Elgin-shire will form a direct communication by the shortest tract from the coast of the Moray Firth and the Royal Burghs of Elgin, Forres, ect, through the interior of the province of Moray and the Counties of Banff and Aberdeen by the new Bridges over the Don at Alford and the Dee at Portarch and from thence over the Grampians.

Accordingly renewed proposals have been made to the Parliamentary Commissioners for their support to this last mentioned Bridge, they were pleased to receive the same favourably and directed their Engineer, the justly celebrated Mr Thomas Telford, to prepare a plan and estimate for the Bridge and to report upon the public utility which might be expected to arise from it. In obedience to these directions Mr Telford has now visited and minutely inspected the spot and the roads in its neighbourhood, and has not hesitated to express the most favourable opinion of the situation, expediency, and public utility of the Bridge, which he will not fail to report to the Commissioners and there is every reason to hope that that Honourable Board will contribute one half of the estimated expense. 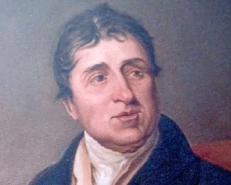 Mr Telford is of the opinion that the situation is peculiarly adapted for an Iron Bridge of one arch constructed on principles similar to that lately erected over Bonar Ferry in Sutherland-shire, and which may be put up without experiencing the least obstruction from the depth or rapidity of the stream or even coming in contact with it a consideration of no mean importance on a river like the Spey. He estimates the expense including the excavation of rock, abutments, embankments and access to the Bridge at about £8000, one half of which sum must be raised by voluntary contributions in the country before the Honourable Board of Commissioners will consent to advance the other half. Hence the failure of raising £4000 would entirely deprive the country of the benefit of an equal sum which would otherwise be effectually secured for the building of the Bridge.

In recommending this subscription therefore to the Community at large the gentleman more immediately concerned humbly apprehend that few stronger inducements need be offered than those embraced by the foregoing ample detail of facts. To the landed proprietors and their Tenants in the vicinity of the Bridge the advantages are incalculable. To those more remote over all the northern and many of the southern counties of Scotland this Bridge must be an object of considerable and lively interest, as well as to the Inhabitants of all the towns and villages in those counties, by travellers of every description whether for business or pleasure, by the merchant, the manufacturer, and more especially by all the dealers in cattle and sheep, this great public undertaking never can be viewed with indifference, it imperiously calls for their liberal support and assistance which is trusted will not be withheld. 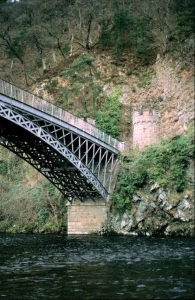 To the philanthropic and benevolent to all interested in the cause of humanity it affords a favourable and noble opportunity of snatching from a watery and untimely grave hundreds of their fellow creatures, for the number of lives which are annually sacrificed in the passage of this rapid and impetuous river exceed all belief. Recommended by so many powerful considerations to the attention of the public it cannot be imagined that a work of so great and vital importance can be allowed to languish, more particularly as the favourable opportunity which at this juncture presents itself of obtaining Parliamentary aid if now lost will in all probability never again occur. The Public of all ranks are therefore anxiously and urgently called upon to come forward with their contributions, and it is confidently hoped that the subscription will be promptly and effectually filled up to the required amount.

The above appeal was issued in October, 1812.

By the close of October the following subscriptions were obtained:-
Colonel Francis William Grant, for the Seafield Estate. £1200
Mr and Mrs Macdowall Grant of Arindilly, £300
Mr Macpherson Grant of Ballindalloch, £200
Mr Gordon of Aberlour, £200.

Dr Longmuir’s guide to Speyside states that the Bridge was erected in 1814 at an expense of £8200, and is 150 feet in span. Mr Simpson, of Shrewsbury erected it after a design by Mr Telford. In the Floods of 1829 it withstood the shock, although the water rose fully 15 feet higher than ordinary, while some stone arches at the eastern extremity as well as a neighbouring cottage were swept away.

To read an extract about the Lower Craigellachie section of the Spey taken from 'The Great Floods of August 1829' by Sir Thomas Dick Launder, click HERE » 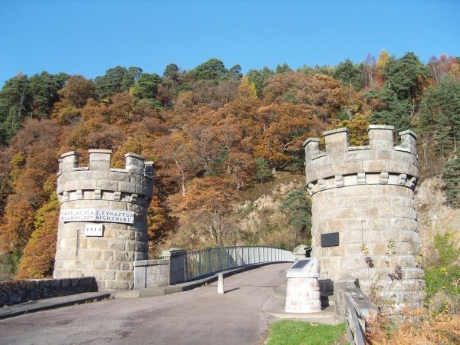 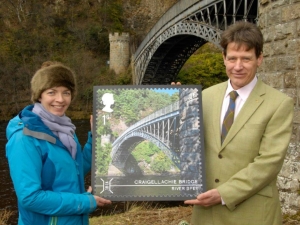 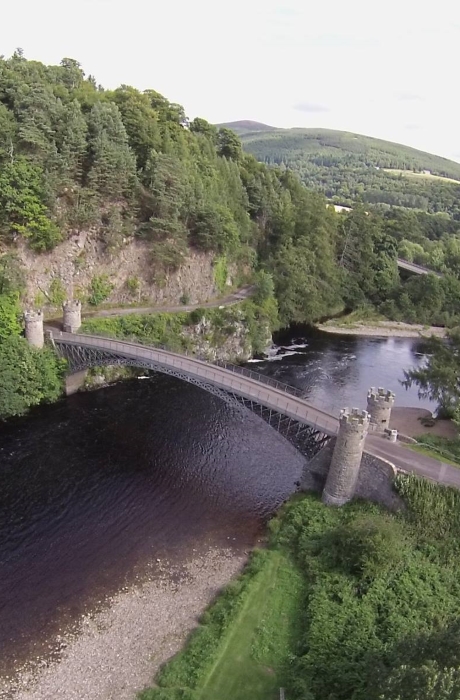